Eftychia Giannaki is the author of a crime fiction series set in contemporary Greece featuring a homicide detective Haris Kokkinos. She was born and raised in Athens. She studied computer science, music technology, and communication. She has worked for several years in secondary education and currently she teaches creative writing. 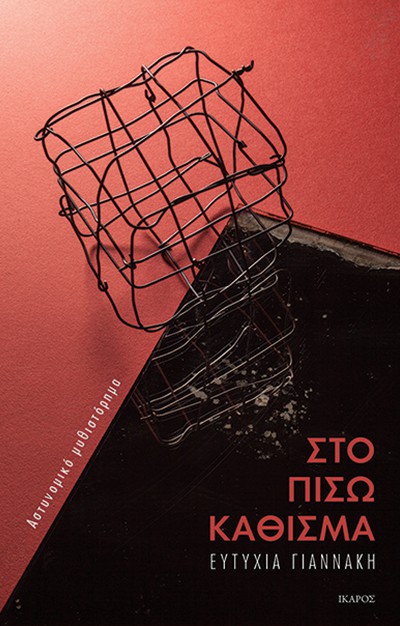 In the back seat

The first book in the Trilogy of Athens, In the Back Seat (Ikaros Publishing, 2016) won the PUBLIC Prize for Best Greek Novel of 2017.

The first story of the crime novel series starring police officer Haris Kokkinos. A theatrical director is viciously murdered in the basement of Plaka Theater in Athens, Greece. Police officer Haris Kokkinos and his colleagues must unravel a case expected to attract public attention. They will soon realize that the motive is hidden in the director’s dark past, and start detangling a thread of common secrets, dissimulation, and violence, in the heart of the city.

At the same time, the son of 45-year old Haris Kokkinos is arrested facing charges that will force him to dive into his family background. The time pressure, the sealed lips, will prove that things are never simple for those sitting in the back seat. In a society where everyone is guilty, some people will pay the price and Haris Kokkinos is among them…

The investigations build a fresco comprised of Athenian citizens, starring in a story that would not have existed if the city did not exist, and nothing will be left in the darkness under its bright sun. 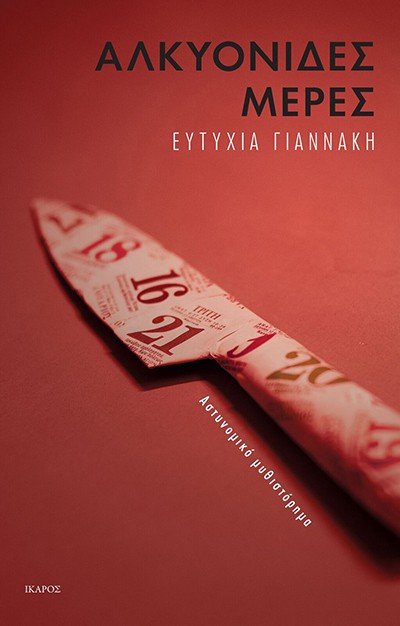 The second book in the Trilogy of Athens, Halcyon Days (Ikaros Publishing, 2017) was shortlisted for the PUBLIC Prize for Best Greek Novel of 2018 and the Literary Magazine KLEPSYDRA.

A young girl from Ghana is found murdered, at the largest shopping center in Athens, Greece. Police officer Harris Kokkinos and his team are summoned to deal with a case wrapped around them like a ball of yarn, while the clock is ticking. The maelstrom in which the detective will be found, including his past and the relationship with his jailed son, will force him to balance on a tightrope in order to shed light on the case and ultimately to himself. In a society unable to protect the weak no one can be considered innocent. 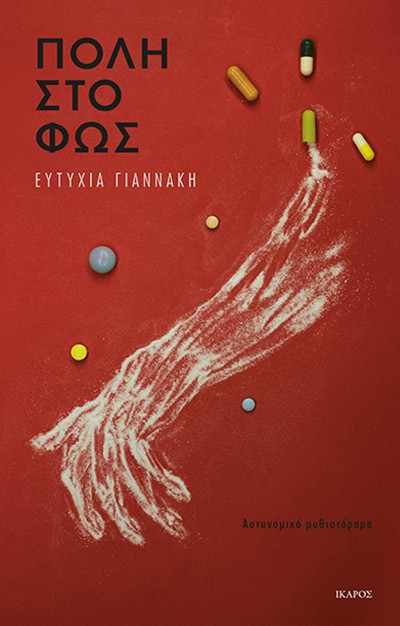 City in the light

The third book in the Trilogy of Athens, City in the light (Ikaros Publishing, 2018) was shortlisted for the PUBLIC Prize for Best Greek Novel of 2019.

A pregnant woman, with a career in modeling, is viciously murdered in her house at Kavouri. As Homicide Detective Haris Kokkinos and his colleagues start unraveling the crime,  they will confront expectations that were disappointed, doping channels in sports, and a circle of violence which had begun in Serbia of 1995 to end up in Athens of 2014.

At the same time, the son of the 45-year old Detective is standing trial for accusations which are testing his tolerance, as he is seeking his own responsibilities for the mistakes of the past.

In this case, everyone is a suspect and the interrogations bring into the light a city which has become a closed room.  The question is, how far can you go when you have nothing to lose anymore.  When you realize that hope is not the last to die.

The story constitutes the last part of the Trilogy of Athens, and it would not exist hadn’t there been for the city itself, its light and its darkness. 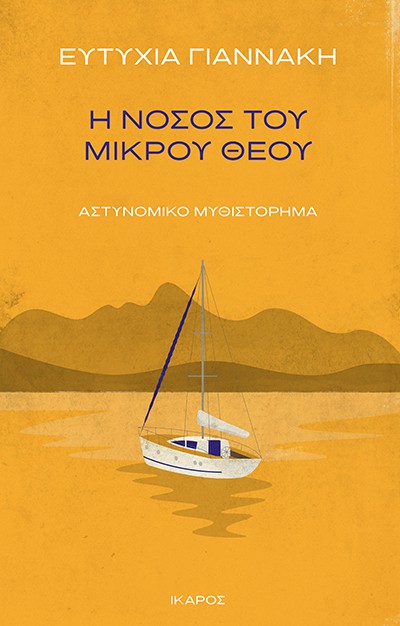 Little God’s Disease (Ikaros Publishing, 2020) is the first part of a new crime novel series titled the “Trilogy of the Deep Sea” and the fourth book starring Detective Haris Kokkinos.

A woman is found dead on her boat at the south end of the Greek island of Paros.  Police officer Haris Kokkinos will get involved in a case that will make him dive deep into the island’s small society, it’s dark past, strange souvenirs, an antiquities trafficking ring, families which makeup the perfect crime lab, and finally his own abyssal depths, where the light merges with the dark.

Little God’s Disease, Eftychia Giannaki’s new crime novel, marks her return into the dark and pliable universe of Police officer Haris Kokkinos with the first part of a new crime novel series titled “Trilogy of the Deep Sea”.  The sharp eye on the society, the total immersion into the human psyche, even the boundaries of crime fiction itself, are all found in the centre of a story that spreads its mesh from the heart of the greek Cyclades islands throughout Europe. 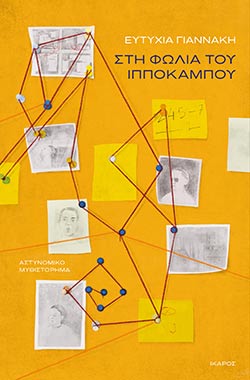 In the seahorse’s nest

In the seahorse’s nest (Ikaros Publishing, 2021) is the second part of a new crime novel series titled the “Trilogy of the Deep Sea” and the fifth book starring Detective Haris Kokkinos.

An active fighting journalist is found dead in the swimming pool of a penthouse at the Kolonaki area of Athens, in her ex-husband’s flat, a distinguished painter, who remains missing.  On her chest she has an enormous tattoo of a seahorse.  The media and the public opinion get uptight over the crime, with every possible murder scenario remaining open until the very end.

While unravelling this case, taking place between the island of Hydra and the city of Athens, police officer Haris Kokkinos and his team are confronted with domestic violence incidents, art networks, the boundaries of creativity and the sealed lips of a small society, which can equally exist either on an island or in the heart of a capital city.

This book consists the second part of the “Trilogy of the Deep Sea”, a malleable universe, a deep sea which devours everything but our stories, true in their lies and false in their truth, with us strongly believing that by now we know how the game is played, each time realizing that this is not enough, that in the seahorse’s nest none of us is innocent.

This would have been a great case for a crime novel, hadn’t i received an email from the victim just the night before its murder and hadn’t i known that the seahorses swim upstream until their hearts literally break. 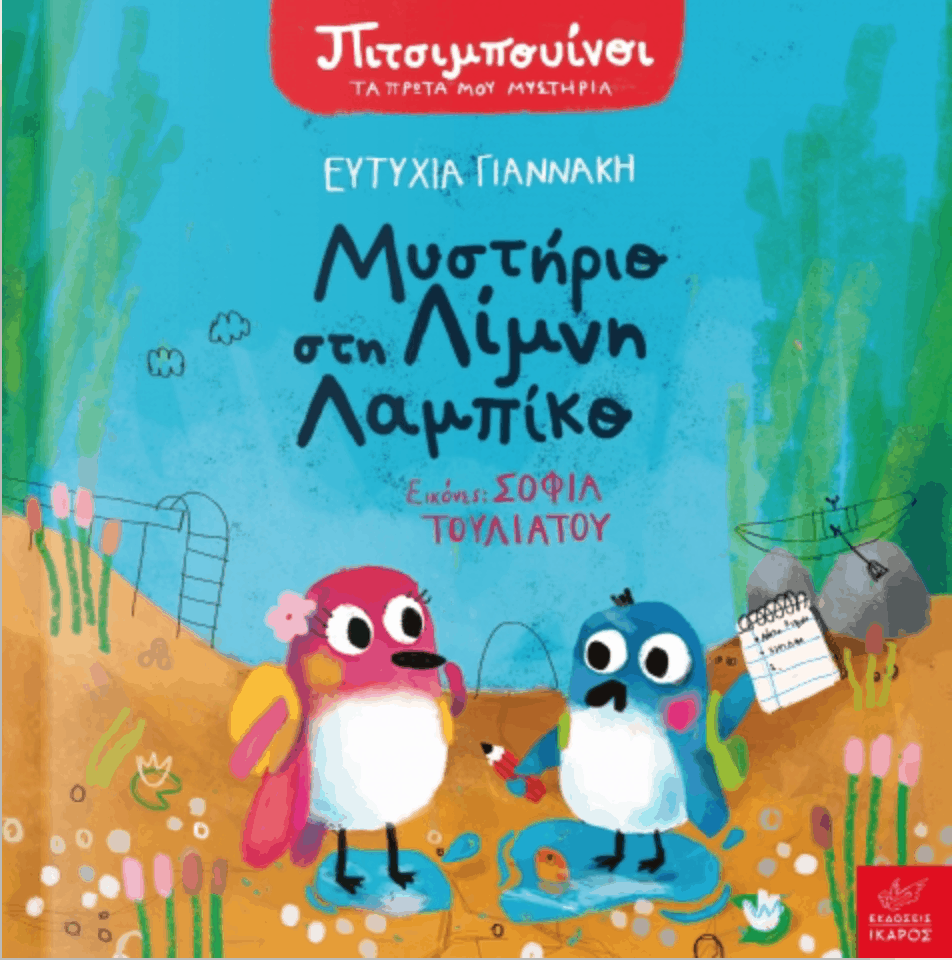 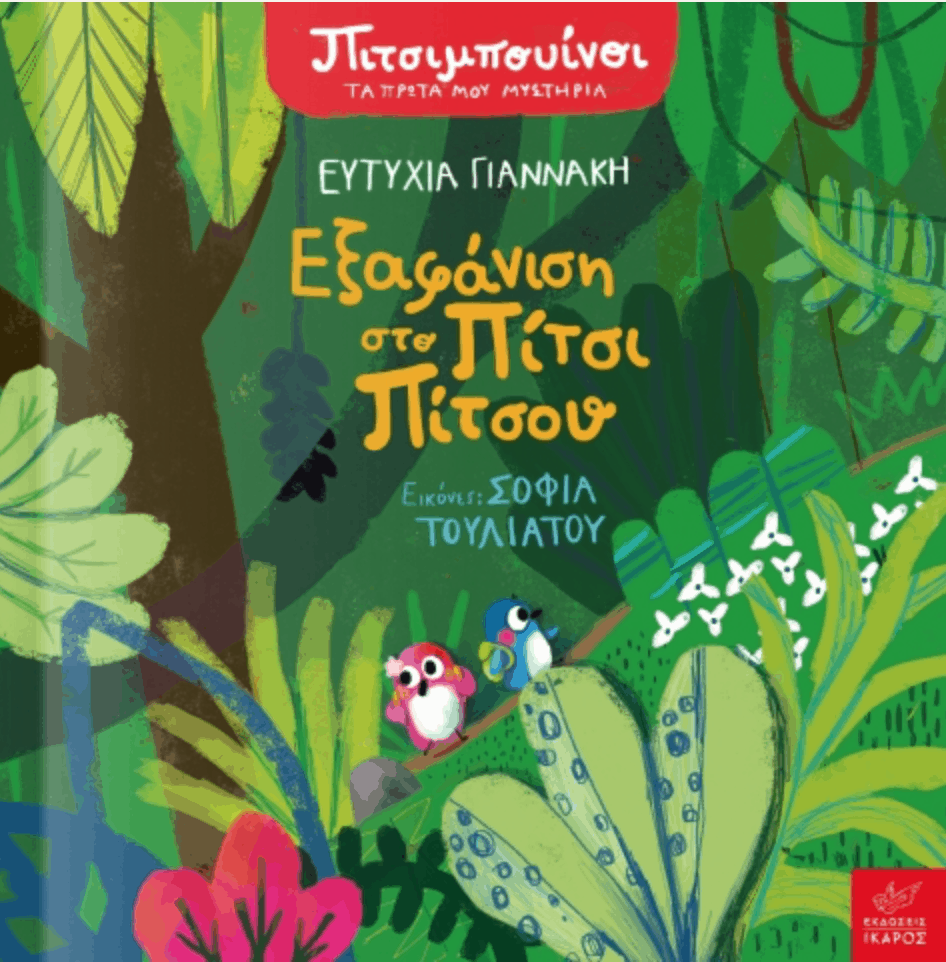 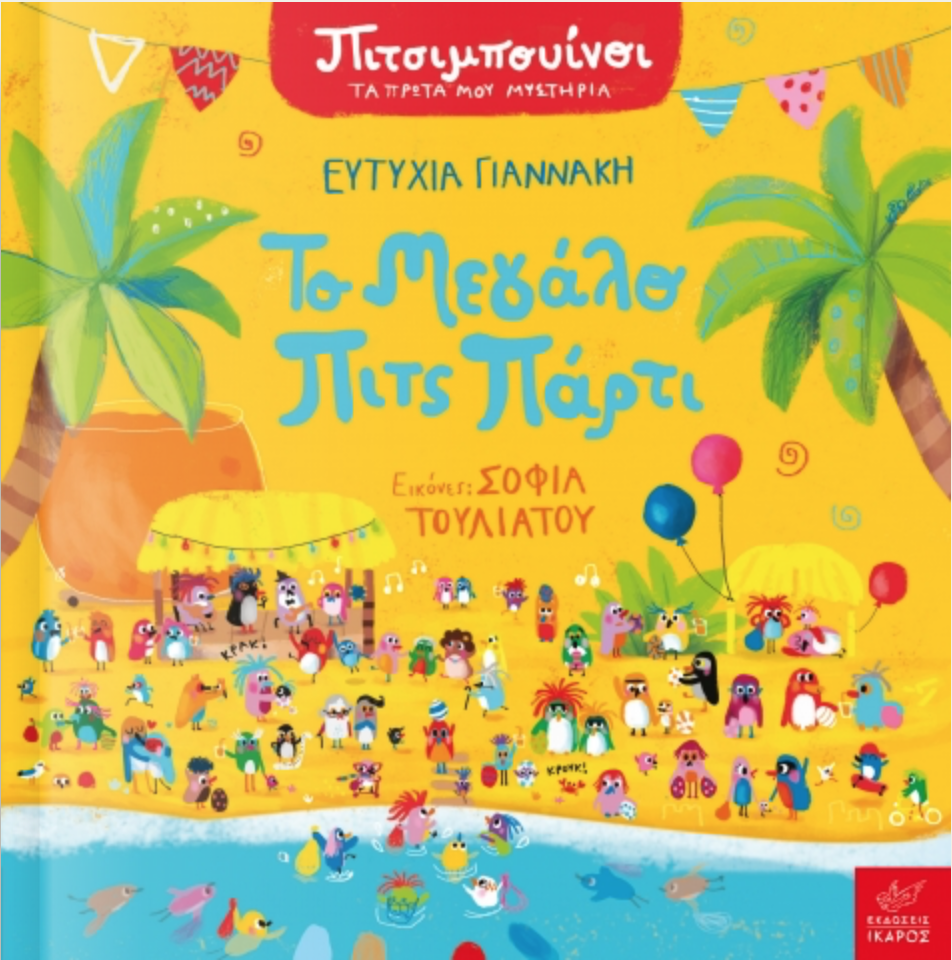 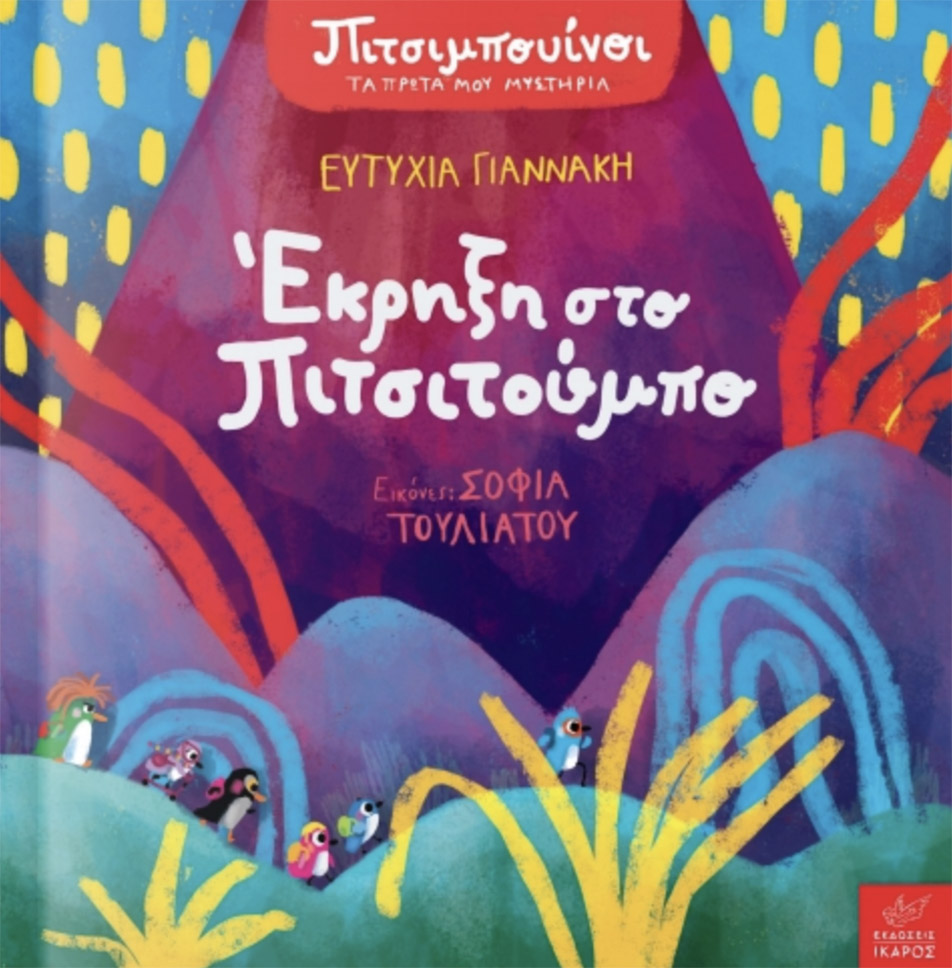 “The mammals” was one of the best three plays of Young Play Writers Lab, and staged at Michael Cacoyannis Foundation, directed by George Lyras (July 2017).  The play was translated in english and published in a bilingual edition by the Greek Playwriters Union (sponsored by The National Bank of Greece).

The First Stop | Metechmio Publishing, which along with the radio station Athens 9.84, participated in organising the event “Athens 2018 Global Books Capital”, short story “In a place of greener pastures…”

In the past, her novel titled “Hardcore” was published (Oceanida publishings), under the pen name Aleka Laskou. In 2004 the book was adapted for a movie, which came out under the same title “Hardcore – The Movie, 2004”, directed by Dennis Iliadis. 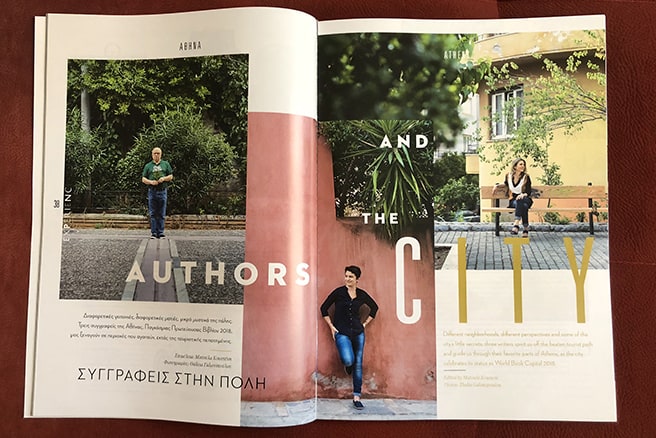 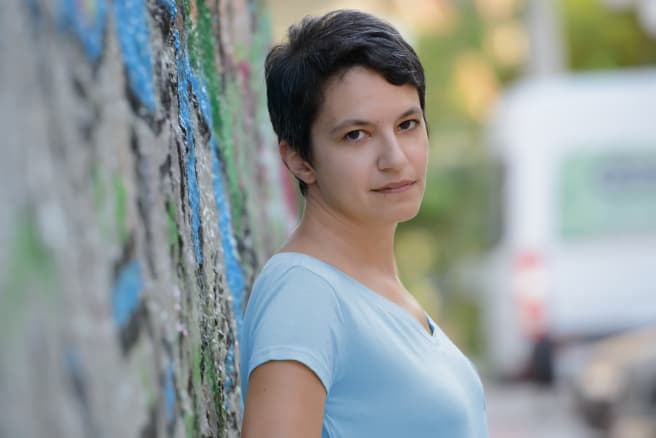 Letter from Athens: a short interview in English

Contact me using the form or directly by email efigiannaki@gmail.com